I just got wind of an article that rumors that Microsoft is cutting orders for its Surface RT tablets in half. It was previously reported that Microsoft had ordered 5 million of the tablet units to be produced, but due to lack luster and modest sales figures, it seems Microsoft want to cut their coat according to their size instead of sticking it out and hoping things will change in the next year.

I’m not a fan of rumors, but if this news is true, here is my recommendation to Microsoft. “Stop Selling the Touch Covers as a separate bundle with a higher price“.

You can currently get the Surface RT ONLY for $499 or Surface RT + Touch Cover for $599, and the Touch/Type Cover only for $119. WTF Microsoft. Your entire advertisement cycle indicated that the Surface tablet was MOST useful when used with the Touch/Type Cover. There was even a whole song and dance routine to the effect, so why sell the two differently instead of just as a replacement when necessary?

I personally believe the sales method chosen has attributed to customers taking a wait and see approach with the Surface devices because most of them would consider it a waste of money to get the tablet alone if they don’t have enough spare cash now, and then have to shell out another $120 – 140 later just to get a Touch/Type cover.

Microsoft continue to hurt themselves with their marketing, pricing and product naming, even though they have “better” products than most of the competition. WTF does “RT” mean by the way? Even though I’m inclined to purchase the device, I would love to know what that abbreviation stands for just in case I have to defend my purchase. Also, if you plan to sell to general consumers, stop naming products as if only business tycoons with loads of money and no idea how the item they are purchasing works are going to purchase the products. (I think the “i” in iPad, iPhone, iMac add the necessary level of “personal” that drives their sales)

It’s not too late for Microsoft to turn things around. They should NOT be like Apple and try to squeeze the life blood out of their customers, but should rather do what they have always done in the past that has made them successful with hardware, i.e. bundle the necessities together for a good price. Desktop PCs are currently not sold with the mouse and keyboard separately simple because they are essential. The Surface tablet should also not be sold without the keyboard because it is essential. WTF am I going to do with Office RT if I don’t have a decent keyboard to go with it? I know several counter arguments can be made about devices, but essentially, don’t let people feel like they are being cheated on quality.

Microsoft have a unique product advantage over other Windows 8 device makers, Apple and Google. If they want to be able to taut their sales figures from the roof tops, then they should make full use of this advantage and not fear under cutting their own competition in the Windows 8 space, because frankly, none of them are really making any sales impact at the moment. 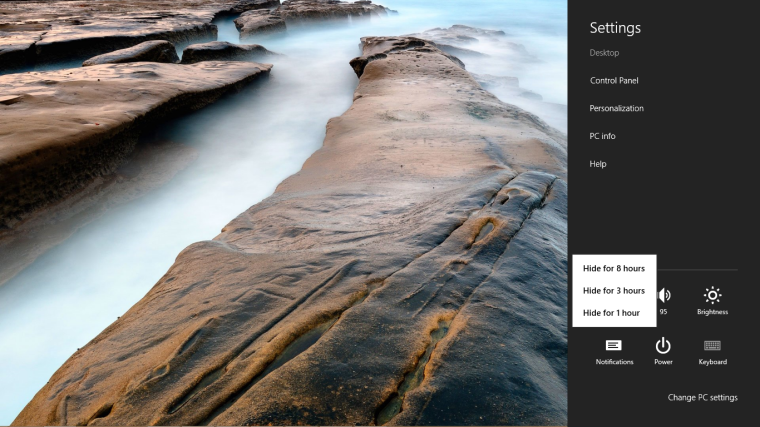 Using Windows 8 for a while now, I noticed it needs a Notifications Center – somewhere you can go to see previous notifications that have come in so you can react accordingly.

The current notifications just pop up and fade away after a few seconds, never to be seen or heard from again. Indeed it is true that you can go to the start screen to see apps that have counters for new notifications like mail and messaging, but it would be cool and functional to have either a pull down list or a dockable list of all notifications that can be viewed, since most often you would like to have quick heads up view whiles in Desktop Mode without having to switch back to the Start Screen to see what’s new.

These ideas certainly aren’t new and are already present in Andriod and iOS devices, but it certainly never  hurts to have functional additions to your OS over time. Windows 8 has a notifications button on the Setting “fly out” but it is only useful for disabling notifications.

That’s my rant for the day. Feel free to post your own ideas or additions below, perhaps someone from Microsoft might casually stroll by and send it off for inclusion in Windows 8 sp1 or Windows 9, whichever one comes first.

I just read an article here: http://venturebeat.com/2012/09/23/microsofts-cloud-service-skydrive-is-great-and-no-one-has-noticed/ and just wanted to respond with my opinion here.

Personally, I use Skydrive and I love it. It is true very few people know about it but that is bound to change by the end of October when more Windows 8 and Windows Phone 8 devices come to market. The skydrive experience is also not complete until Office 2013 is released and users can benefit from the document sync functionalities that have been built in. I’m using the preview as well and I think it is pretty solid stuff.

Microsoft is simply bidding time until all its products are ready, and then Skydrive will really take off. For us early adopters, we just need to enjoy the free ride until then because it won’t be completely free then.

Impressions on Windows 8 Beta (Consumer Preview): Not sure if it is because I have a lack of desktop applications and don’t want to install them at this point, or that Microsoft have done their work well, but I seem to spend (want to spend) more time in the Metro Interface than the Desktop when in that mode. But once out of Metro and back in Desktop, I just don’t want to go back, but the bloody start screen always gets me back there. Metro seems to be serious waste of screen real estate when using a Laptop, because there is little reason to have all that free space, when icons, buttons or screen elements could be put there.

Metro IE 10 is good and works as good as my trusty Opera, so once in Metro world, going back to Desktop just to have Opera feels disconcerting.

Metro is a bit boring. Full screen all the time with slow(er) internet connectivity and the nonsensical requirement to login (Windows Live) to almost every app on the system is just annoying.

The App Store is pretty neat. I found a nice WordPress App to install and it works pretty well.

Windows 8 Consumer Preview is looking solid, but I wish my recommendations from my Wishlist article could have been implemented. Jumping between worlds is still not that fun in the long run. I’m going to install more desktop applications, e.g. Netbeans and SVN Tools, to see how productivity feels like with all the current changes.

I’ve been using the Windows 8 Developer Preview for a little over two weeks now, and I’m pretty pleased with it overall. I’ve managed to load up Netbeans, WAMP Server, Opera and several other niceties that I use on a daily basis and everything is chugging alone nicely without complaint. The only thing about Windows 8 that is a bit awkward is launching applications whiles in the Windows 7 Environment. END_OF_DOCUMENT_TOKEN_TO_BE_REPLACED

Internet Explorer 9 is the hottest thing in town at the moment and is generating a lot of good feedback from early adopters and users, but one of IE9 biggest features could result in potential madness in the coming months and years. The feature I’m referring to is Site Pinning. END_OF_DOCUMENT_TOKEN_TO_BE_REPLACED

Microsoft is known for producing some of the best “Client User” facing software in the world, e.g. Office 2007+, Windows XP+. However, when it comes to “Developer” facing tools, some of their products are down right crap. One such tool is the SQL Management Studio for MS SQL Server.

I’m currently using the Express Edition on my local system for some basic tasks, and sometimes some of these basic tasks can be so impeded it is mind boggling. One such task is exporting a Database table or a Result Set as  DML SQL Query, i.e. exporting the returned result set as automatically generated INSERT or UPDATE statements.

The language of databases is SQL and it surprises me that it takes so much from a tool like SSMS to generate such a basic thing. Other database platforms I have worked with including MySQL and JavaDB both have simple tools that enable you to get data exported in such fashion with no more than three clicks of the button. MySQL has the PHPMyAdmin interface, Navicat’s database access tools and several other tools that make it immediately possible to get your data exported as an SQL Query. JavaDB although with a smaller less mature tool set, has the Netbeans IDE with built in database management tools which can get your data exported in seconds. There are a host of other Java based tools for accessing the database which also get this done nicely.

I can’t for the life of me understand why Microsoft choose to provide a flagship tool for the database server, and make it so damn difficult to do such a basic thing. It peeves me that I need to launch Netbeans, make a database connection to which ever MSSQL Server just to get data exported, when Netbeans was not designed specifically to be a database front end tool. I don’t use the Full or Professional edition of SMSS but I can’t expect the process of getting a result set exported to an SQL Query to be any less difficult than in the express edition.

I doubt anyone from Microsoft will read this, but I think it is better to vent than to keep this all bottled up.

ICED IN CODE
Blog at WordPress.com.